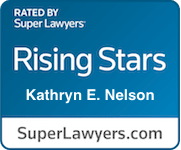 Kathryn Nelson has served as Of Counsel with Berg Plummer Johnson & Raval, LLP since 2014. She has focused her legal career across two decades on handling complex business litigation for small and mid-size organizations in contract, employment, and regulatory matters. She has represented individuals in professional malpractice and employment disputes as well as in personal injury actions. Her noteworthy successes include obtaining the dismissal of a False Claims Act suit against healthcare provider and obtaining a civil settlement against a privately held commercial grocer for making false claims and using falsified documents to make those claims, violating the Food, Drug and Cosmetic Act and causing their customers to violate the Act.

She likes commercial litigation work because she is helping clients save their businesses and preserve their life’s work. She has also enjoyed learning the nuances of heavily regulated industries and how to navigate complex federal regulations to help her clients achieve the best possible outcomes. Her approach is to be empathetic but honest and frank, painting a realistic picture of the client’s situation while letting them know you care about them and the matter’s outcome.

She was recognized by her peers for inclusion as a Texas Super Lawyers Rising Star in 2007 and 2010 for business litigation. She is also a member of the Houston Bar Association and State Bar of Texas Litigation Section.