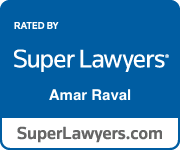 Amar Raval has been a Partner with Berg Plummer Johnson & Raval, LLP since 2017. He focuses his practice on insurance claims and insurance litigation, including but not limited to working with policyholders with claims disputes regarding health insurance, life insurance, accidental death and dismemberment insurance, and disability insurance. Amar has worked in the legal industry since 2004, working with legal industry veteran and accomplished trial lawyer Jim Plummer for his entire career. In addition to his current work, he has also represented clients in personal injury matters and in business litigation. Amar is a true trial lawyer with extensive and successful experience at every stage of litigation, from filing lawsuits through appeals.

What Amar enjoys most about being a lawyer is helping people who need the help fighting their own insurance companies for the benefits they are entitled to. Policyholders have an insurance contract where their insurer made a promise and he makes sure they honor their promise. Whether it’s disability, accidental death, health, or life insurance, he helps someone and their loved ones with nowhere else to turn because an insurance company broke its promise to them.

Of what it’s like to work with Amar, his attorney peers say, “I have worked with Mr. Raval before and find him to be extremely knowledgeable and professional, and he gets the job done” and “Amar Raval is an outstanding attorney! He goes above and beyond for all his clients, peers, and community in any capacity he can. He will fight aggressively and persistently to ensure justice and maximum recoveries for his clients. I would absolutely trust him to protect me and my loved ones in health insurance, life insurance, ERISA, and all insurance related matters. He will continue the fight as far as needed into litigation. An absolute diamond of an attorney!”

Amar’s clients have left him numerous grateful online reviews, including statements such as “I had issues with receiving payment on valid, current policies after a cancer diagnosis, and received every excuse the insurance company could think of not to pay the claims. Thanks to Amar’s support, both the short-term disability and cancer policies were approved. Hiring Amar Raval to handle these horrid insurance companies will be the best decision you can make!”

In addition to achieving and maintaining a Martindale Hubbell AV Preeminent Rating, he was selected by his peers for inclusion in Texas Super Lawyers in both 2021 and 2022. Amar won the State Bar of Texas Asian Pacific Interest Section’s Best Lawyer Under 40 Award in 2018. He was also selected as a Texas Bar Foundation Life Fellow in 2015, an invitation-only honor he maintains to this day. He is a member of the American Bar Association, Texas Bar College, Houston Trial Lawyers Association, South Asian Bar Association of Houston, Texas Minority Attorney Program, Asian American Bar Association of Houston, and State Bar of Texas.