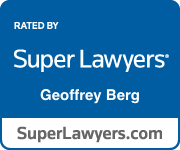 Geoff Berg has been a Partner with Berg Plummer Johnson & Raval, LLP since 2014. Prior to forming his current firm, he worked with some of the best regional and national firms for his practice areas of commercial litigation, employment litigation, and civil litigation. He has worked in the legal industry since 1995. In addition to his current work, he has also represented clients in personal injury matters and in insurance litigation. Geoff has extensive experience handling matters himself at every stage of litigation, from filing lawsuits through appeals in courts across Texas. In addition, Judge Mike Engelhart of the 151st Judicial District Court of Harris County, Texas appointed him Special Commissioner to rule on eminent domain matters.

Of his approach to his practice, Geoff begins with a focus on trying the case. He believes that a case in litigation is about the ultimate trial and thinks about trial strategy from a matter’s inception. The reason he has been successful is because he never looks for the quickest way to settle, which puts him on the path to obtaining the best possible result for each client. Clients will get the best possible resolution when they work with a trial-oriented lawyer that other parties know is prepared to go to trial, because that affects potential case value.

Of what it’s like to work with Geoff, his attorney peers say, “When one of my clients needs a lawyer to handle a matter that might involve business litigation, I send him to Geoff. Geoff is an outstanding lawyer with a fighter’s heart; I endorse his work wholeheartedly.” Clients like working with Geoff and his team because they win and because he makes them feel like their case is his only case by responding quickly with detailed and thoughtful responses to their every question. He understands that at times a client’s entire business is on the line and that matters to him in terms of how he works with each client and how he approaches each matter. His goal is to help his clients be able to sleep at night during the pendency of their business litigation matters.

Geoff has been recognized by The Best Lawyers in America® for Commercial Litigation for 10 consecutive years, and has achieved the highest possible rating with Martindale Hubbell – an AV Preeminent Rating. He was also selected by his peers for inclusion in Texas Super Lawyers from 2004 to present as well as previously in Texas Super Lawyers Rising Stars in 2004. He received the Who’s Who Lifetime Achievement Award, was named among the Best Lawyers in Texas by The Wall Street Journal, named a Top Rated Lawyer by American Lawyer, named to the inaugural list of Texas Super Lawyers in the Corporate Counsel Edition, and has received numerous recognitions for his legal successes by H Texas magazine and Houstonia magazine.

He was selected as a Texas Bar Foundation Life Fellow, an invitation-only honor he maintains today. He is a member of the Colorado Bar Association, Pennsylvania Bar Association, Houston Bar Association Commercial and Consumer Law Section, and State Bar of Texas.